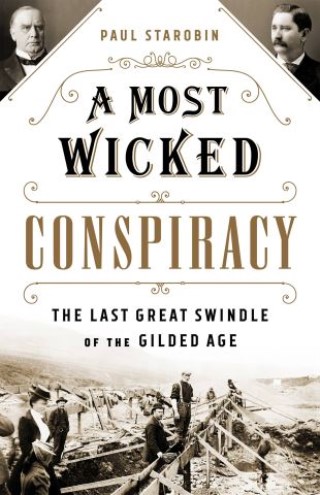 A Most Wicked Conspiracy

The Last Great Swindle of the Gilded Age

A tale of Gilded Age corruption and greed from the frontier of Alaska to America's capital.
In the feverish, money-making age of railroad barons, political machines, and gold rushes, corruption was the rule, not the exception. Yet the Republican mogul "Big Alex" McKenzie defied even the era's standard for avarice. Charismatic and shameless, he arrived in the new Alaskan territory intent on controlling gold mines and draining them of their ore. Miners who had rushed to the frozen tundra to strike gold were appalled at his unabashed deviousness.

A Most Wicked Conspiracy recounts McKenzie's plot to rob the gold fields. It's a story of how America's political and economic life was in the grip of domineering, self-dealing, seemingly-untouchable party bosses in cahoots with robber barons, Senators and even Presidents. Yet it is also the tale of a righteous resistance of working-class miners, muckraking journalists, and courageous judges who fought to expose a conspiracy and reassert the rule of law.

Through a bold set of characters and a captivating narrative, Paul Starobin examines power and rampant corruption during a pivotal time in America, drawing undoubted parallels with present-day politics and society.

Paul Starobin: Paul Starobin is the author of Madness Rules the Hour: Charleston, 1860 and the Mania for War, praised by the New York Times as a "fast-paced, engagingly written account" of the hysteria that descended on Charleston, South Carolina, on the eve of the Civil War. He has been a frequent contributor to the Atlantic and is a former Moscow bureau chief for Business Week. He has written for other publications including the Wall Street Journal, Washington Post, City Journal, Politico, and National Geographic. He lives with his family in Orleans, Massachusetts.