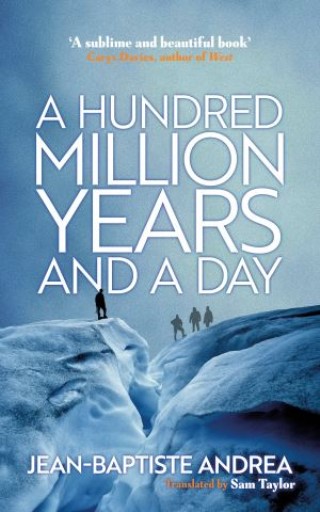 A Hundred Million Years and a Day

A page-turning, moving novel that asks how far we should go in pursuit of our dreams, A Hundred Million Years and a Day joins a long lineage of classic adventure fiction that includes works like Moby Dick, Carys Davies's West and Ian McGuire's The North Water. It has echoes of true-life accounts of adventurers pushing the limits of human endurance, such as Touching the Void and Into the Wild, while tapping into the current vogue for man-and-nature writing such as The Salt Path.

With moments of high drama and suspense as time runs out on the mountain, it’s also a gentle, reflective and warm-hearted tale about friendship, and what it means to be a dreamer, to the extent that you’ll risk everything for that dream.

Jean-Baptiste Andrea is a screenwriter-turned-author, and the novel has a very filmic quality. He is a fluent English speaker, able to take part in broadcast interviews and events. His debut novel, Ma Reine, won 12 literary prizes in France. A Hundred Million Years and a Day is one of the big books of the French rentree season in Fall 2019 and has been chosen by French booksellers as one of the Top 5 Titles of Fall 2019 in Livres Hebdo. It was shortlisted for the prestigious Grand Prix de l'Académie Française 2019.

The translator of the novel is Sam Taylor, translator of several of the most successful French novels in translation in recent years, including HHhH, Lullaby/The Perfect Nanny, The Truth about the Harry Quebert Affair, and The Heart, which won the French-American Translation Prize. His involvement is a stamp of quality on the project. As Sam lives in Texas, he may be able to help promote the book in the US and there could be a panel discussion between him and Andrea.

Jean-Baptiste Andrea: Jean-Baptiste Andrea is a director, screenwriter and author. Born in 1971, he grew up in Cannes. His first novel, Ma Reine, was published in 2017 and won 12 literary prizes including the Prix du Premier Roman and the Prix Femina des Lycéens.